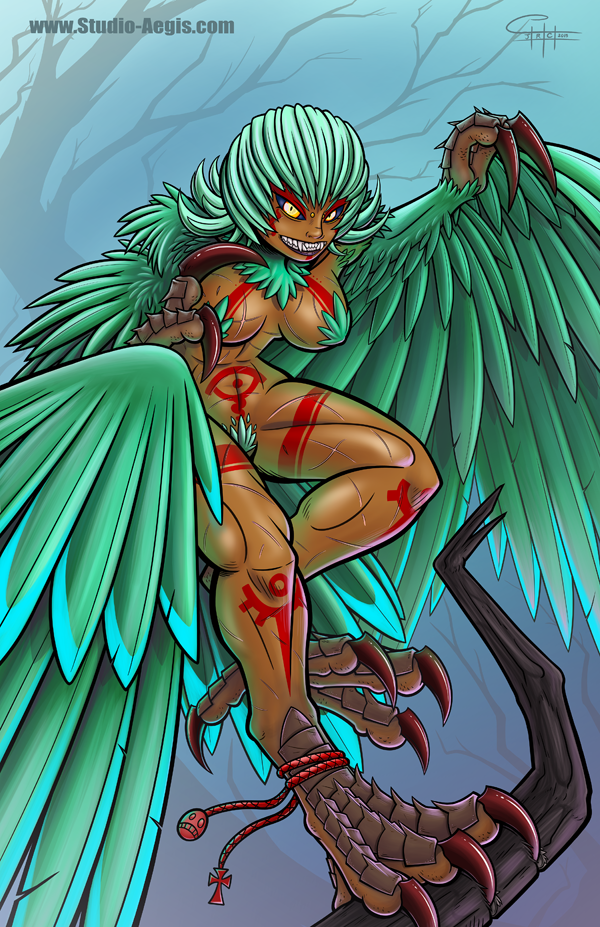 Harpy Shrieker
The panicked man squeezed himself into the bombed out hollow of a gnarled tree. He was so frantic to find shelter, so terrified, that he barely even noticed the jagged splinters digging deep into his flesh. He tried to keep as silent as possible, but each breath felt like a whirlwind of sound in so tiny a space.

A meaty thud impacted just outside making the man’s heart skip two beats. Against his better judgment he slowly opened his eyes. They stung from the intense sweat flowing down his face mixed with the ashes descending like corrupted version of snow. It was one of the security guards from the Keep. The same guards that the Fife Lord had boasted would be more than capable of ensuring the loggers safety.

A horrible gurgling moan escaped from the guards body. The man cringed at the sound, how was the guard still alive!?

Both of the guard’s legs were shattered. Bright red fluid poured from his mouth choking out his attempts to cry for help. He was a goner for sure, he just didn't know it yet.

The dread quiet of the morbid scene was shattered by a horrific shrieking sound, it was like nothing he’d ever heard before. Like rusted nails scraping across a blackboard but mixed with a screeching wind one might hear if caught by a raging tornado. The ungodly sound tore at his ears, at his very mind. If it were the voice of a sentient being then surely it was as a creature filled with an intense hatred for all other life. He clutched his ears in pain.

An emerald figure slammed onto a twisted burnt tree causing it to bow and splinter with the impact. It could barely support the weight of the awful yet somehow alluring creature. She unfurled her emerald wings engulfing the dying guard beneath her in inky black shadows.

It was most defiantly a she. A creature with bronze skin built entirely out of claw bones and sinuous muscles, clothed in immense emerald feathers. Her gigantic eyes were golden orbs that starred into the depths of one’s soul. Her body was covered in deep gauges that only served to accent the arcane body paint decorating her lithe form. If there was any meaning to be had by those twisted symbols surely it was that death would soon to follow any who viewed them.

A thin slit stretched across her face. Her lips peeled back to reveal a set of monstrous canines that easily put even the best of the forest’s wolves to shame. Was she smiling? The thought of it sent shivers up his spine.

She cocked her head to the side inspecting the wounded guard. Her neck twisted to an inhuman degree were her head was practically upside down. Sinews could be heard twisting and bones popping with the movement, though she seemed to not be bothered by them. A gale of wind blasted through the grisly scene as the Harpy started flapping her wings menacingly. The man still wedged in the squeezed his eyes shut and clenched his teeth.

That horrendous shriek again! It scraped away at the edges of his sanity. A horrified whimpering was drowned out by what could only be described as the sound of several meat cleavers sinking deep into wet meat. Then after an explosive blast of wind, dead silence quickly filled the burning encampment.

He cowered there for what felt like hours. Eventually he gathered what little courage he could muster and slid out of his hiding spot. A pool of wet earth was all that remained of the guard. No body, and no monster.

He took an uneasy breath of relief, he had somehow surviv...

The man’s blood turned to ice as a massive gust of wind crushed his body against the red mud! He didn't even have time to scream as a massive emerald form plucked him off the face of the earth never to be seen again by mortal man.