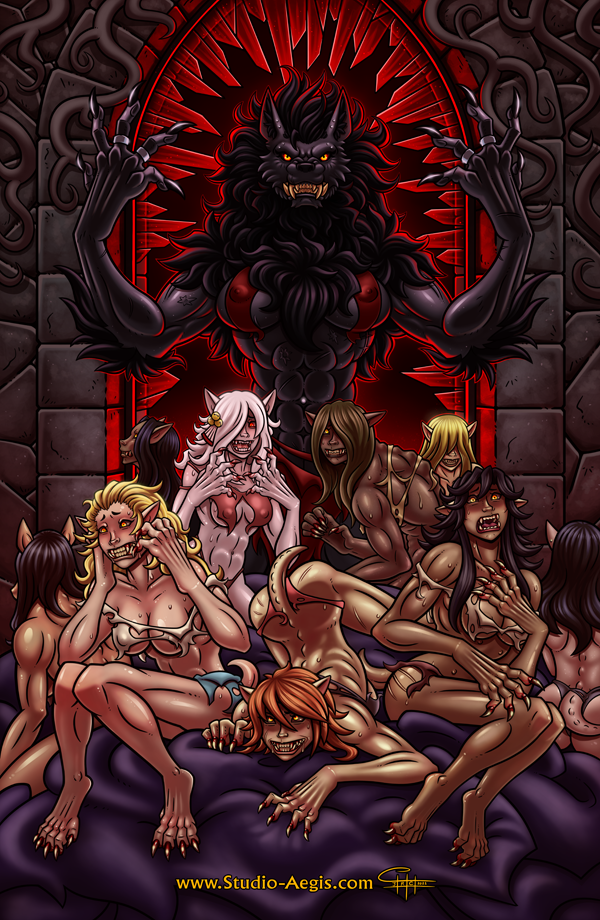 Ritual
Rualo woke gasping in terror. The sounds of ethereal howls echoing off in the distance.

He tried to stand up move but a sharp twinge of pain and clanking of metal quickly brought the severity of his situation into focus.

He looked about frantically trying to gauge his surroundings and think of a way to escape.

“Lupina’s Hollow” The words echoed through his mind as his blood turned to ice.

To the Elite the words conjured images of carnal delights, but to one such as himself it was a death sentence of the utmost cruelty.

The ancient structure was massive, and stretched on into infinity itself. Silently an eerie mist rose from the wet stones dampening all sound. Why was it so humid?

The dais he was chained to felt like a lone island floating deep within the heart of limbo itself. Besides a few clumps of bluish moss the only thing he could find were shards of old bones. Puncture marks from teeth buried deep into their sides.

He desperately jammed a shard of bone into the manacle’s key hole trying to find a way to pry open the mechanism. He froze suddenly upon hearing the voice of a woman. A voice with a rich timbre, it echoed from close by. Alas, try as he might he could not pinpoint their location.

“Now too, shed your human garb as you will soon shed your frail human forms.”

Distressed sounds of women could be heard as their garments were forcibly torn from them one by one. A second voice loosed a hissing cackle at the site of one of her peers.

“Scars are no laughing matter. They are badges earned by crossing paths with death himself and escaping with your meager life intact.”

The second voice simpered disappoint at being scolded.

“Watch now and focus, for those who fail to meet their full potential this night will be cast into the great pit of bones, after, I've had my fill of you!”

“Open the portals!” She boomed into the foggy veil.

A rush of cool air blew past Rualo. The sounds of heavy stones sliding open drew his attention to the vaulted ceilings. Glowing rays of moonlight began to trickle in illuminating the hollow. He might have appreciated their beauty if not for what came next.

The first voice started to lose a guttural growl. The sounds of cracking bone and ripping sinew filled the space. It was like she was right next to him. Rualo fidgeted with the manacle in a hurried frenzy as the woman’s moans of pain grew in pitch.

He cursed the weakness of his body. At his inability to call upon the transformation at will. He’d fought so hard to strengthen himself but it was all for naught, he was little more than a whelp compared to the elite of the Fang.

The woman loosed an impossible scream that took on a monstrous tone. It went on for what felt like hours, her intensity and cries growing deeper and fiercer with each crack of bone. He was sweating bullets.

“Damn this thing!” he cried as the splinter fractured and sliced his hand open.

The cries had stopped. The dead silence was replaced by thudding footfalls of something humongous, the sounds accented by clicking of claws on damp stone. His body began to shake uncontrollably as the beast strode into the moonlight. Long ebon locks flowed down the length of her massive back. Her body seemingly chiseled from a polished black stone and stood well over 9 feet tall. Her tail flowed back and forth like a velvet black cloak.

He lay there immobilized by the crushing aura of her presence. She stopped at the center of the spot light cast by the moon and motioned for her girls to approach. The athletic builds of five women close in around the She wolf. They looked so tiny and frail compared to colossal form. Each girl was breathing heavily, their eyes filled with looks of anticipation and fear.

Sweat drips from their supple forms as the wolf rears her massive head back and loosed an ear splitting howl deep into the night! It penetrates and reverbs within their very souls beaconing for their inner beasts to awaken. Their bodies begin to tremble and convulse as the curse takes its hold upon them.

He can feel his own bestial nature stirring as his body quivers at the sight of them but his is too weak to join them. The ebon She wolf stares directly into Rualo’s soul, her eyes, glowing orbs formed of pure hellfire. She growls in anticipation as she hugs her new daughters close urging them on.

He cowers in terror incapable of freeing himself from her gaze. He is doomed to be their first kill. The sounds of popping bones and snarling cries fill the now chilled air. In the howling songs of hopeful sisters begin. They beacon their new siblings forth. They Beacon them to assume their roles as mothers for the next generation of soldiers for “The Fang”. 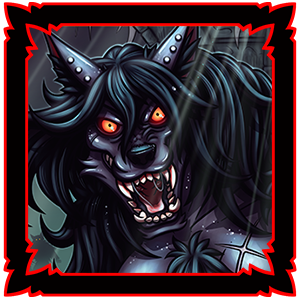