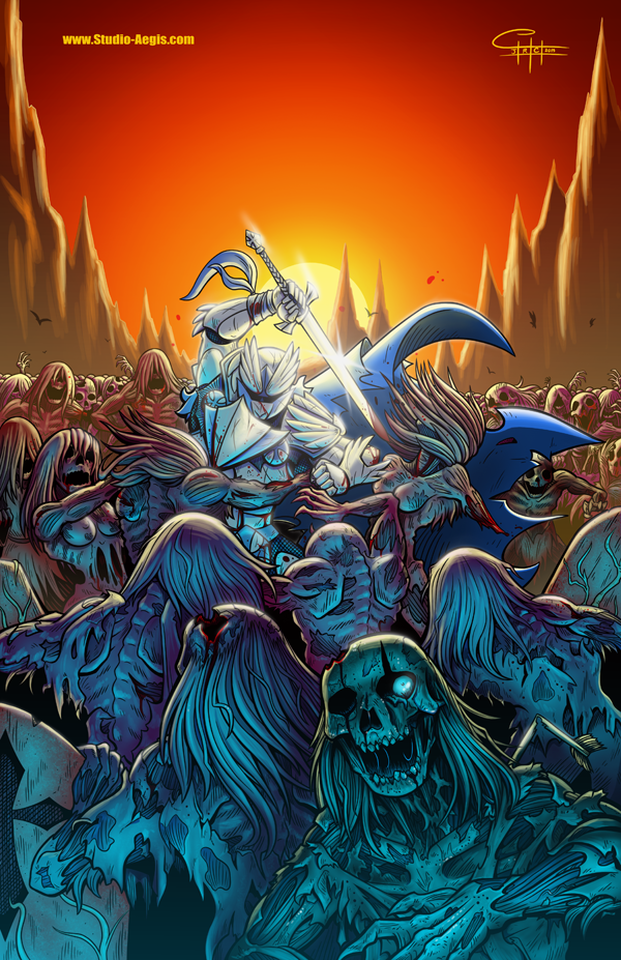 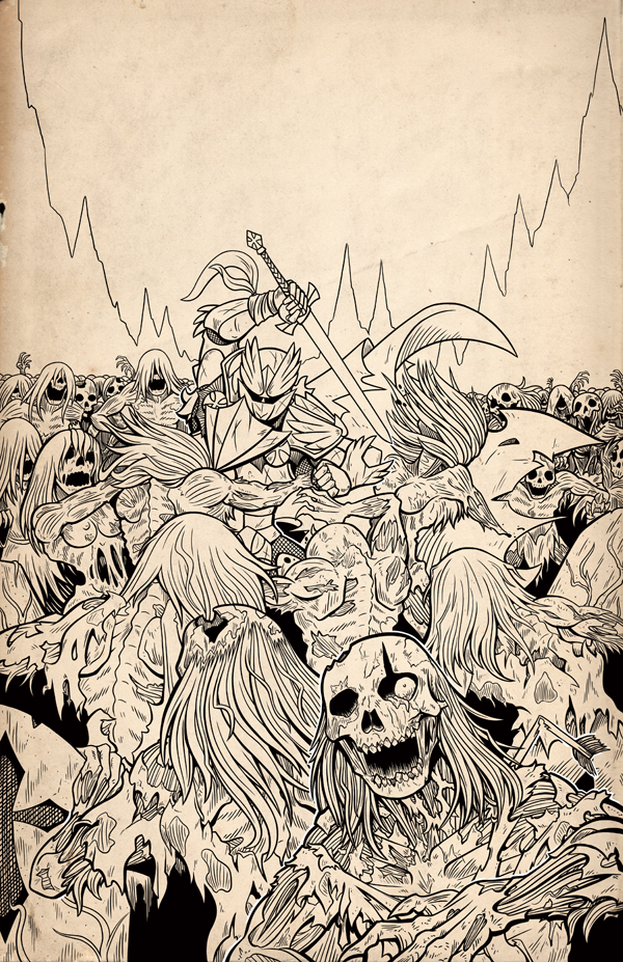 Legion Of The Dead
The incessant howling wind had died off rather ominously. The frigid Paladin scanned the bleak landscape for any signs of activity. He knew he was walking into a trap, the question was what form it would take. He dismounted his weary stallion and shook the frost from his tattered cloak.

The Ghoul’s road, the primary gateway into to the dark lands. A treacherous road forbidden to all with any sense to value their own lives. The twisted path snaked its way through the mountains in ways that seemed to throw logic out the window. The only evidence that any life had ever existed in this place, besides the unfathomable number of bones strewn about it, were the numerous weather beaten sign posts warning travelers to turn back while they still could.

The road bottle necked so tightly in places that troop movements were restricted to traveling in sets of two or three. Today though, only one traveler dared to challenge this wicked road. It wasn’t for his own sake that he did, but for the sake those whose lives hung by a knife’s edge beyond that icy tomb.

A day’s travel through that desolate place lead the Knight to a frosted field. A burned out chapel could be seen in the distance surrounded by countless decrepit tomb stones. Many military formations had attempted to breach the mountain pass over the centuries and each time they were swallowed up at this very place never to be seen again.

The Paladin knelt down and brushed aside the snowy froth; he didn’t like what he found. Beneath a thick translucent sheet of ice his gaze met the ghastly stares of more than a dozen ghoulish corpses.

“So that’s their game is it?” The knight turned toward his horse who started acting quite nervous.

An eerie creaking sounds echoed across the field and loosed the slightest of tremors. He turned quickly sensing that he was no longer alone. An eerie girl stood before him. Long tangled hair hid her face. Her ragged nightgown stained brown with dried blood. Her exposed limbs were, grotesque, skin flayed into ribbons hung from her tiny limbs. Every joint and sinew exposed for all to see. Slowly the Knight reached for the hilt of his blade.

She couldn’t have been more than 12 in life. Images of his own daughter flashed in the back of his mind. Child ghouls were always difficult to deal with. They could be put down easily enough but one’s mind was always left… wounded. Unearthly moans echoed from deep within the icy haze.

The knight drew his gleaming blade and swung back around in a single fluid motion at the sound of his horse wailing in pain. Dozens of ghouls were tearing into the animals flesh ripping at its raiment and gear.

He was about to lunge at the attackers before getting jumped from behind by the ghoulish child. Her bony claws desperately tried to rip away at his mirror like armor but to no avail. He flung her to the ground and caught just the briefest of glimpses of her dreaded skull like visage. It sent shivers up his spine. He sliced her head clean off noting how her body continued to thrash and struggle against a foe it could no longer perceive.

He wasted no time, he turned toward the chapel and immediately plowed through three full sized ghouls without even thinking about it. He sent them flying into a dozen more knocking them down in a crumpled heap. The terrain was much more difficult to navigate now that its smooth coating had been torn away.

Open graves littered the field by the hundreds, when possible he would knock his growing pursuers back down but his situation was becoming all the more hopeless by the second. The cracking sound of ice could still be heard echoing throughout the land.

Dozens turned to hundreds, turned to thousands, and the wailing! It grew in pitch as the legions numbers continued to multiply. Though their bodies were light and frail their musculature was ridiculously strong. Decapitation wasn’t enough to put them down they had to be broken beyond mechanical functionality.

He made it at least 300 yards before their numbers overwhelmed his movement. The horrible sound of raw bone scratching away at his armor was grotesque. They kept piling on doing everything in their power to drop him to the floor. Night would fall in about 5 minutes his fate would be sealed if he couldn’t find a way through soon.

“By your will lord.” He whispered to himself.

“Grrrraaaaaaaaghh!!!” The gleaming Paladin erupted into a flurry of movement. With each step five or more ghouls dropped to the floor, every motion of his singing blade severed arms, heads, and torsos from one another. Whenever his arms were grabbed he would counter with a crushing elbow shattering skulls like pottery.

Just how long could he hold this pace though? For as glorious a spectacle it was to behold his energy was draining from him by the second. It would only be a matter of time before they took him down and began tearing him limb from limb.

It was getting so hard to move, there were just too many bodies to step over. In the distance though he glimpsed an ethereal blue light. Something in the back of his mind told him that if he could just make it to that light he might live to see another day.

His knees felt like they were on fire, his lungs felt like they were about to burst. He continue cut a swath through the hoard despite how much his body screamed for him to just give up. As the light continued to grow something about it gave him the strength to continue well past his breaking point.

Soon he reached a point were all he could hear was the beat of his own heart, the pitiful wail of the ghouls faded into nothingness.  As he zeroed in on the glow the sheen of his blade swung back and forth like a pendulum. With each swing the light reflecting from it grew brighter and brighter. Until only whiteness remained. For a long while only a high pitched ringing could be heard, the rest of the world just faded away.

He awoke to the sight of strange sort of wind chime dancing in a cool breeze. It reflected the morning sun into his eyes giving him strength to rouse. He tried to move but was quickly made keenly aware of the numerous injuries his body had sustained.

“Haaay don’t try to move, you’ll open up your wounds again.” The voice of a girl, one not familiar to him.

“You’re pretty crazy, ya know? I’ve never seen anyone break through that hellish death trap before. I’m amazed you even woke up at all. You’ve been asleep for three days. I thought we’d lost you a few times there but it looks like you might pull through. So what should I call you?

The Knight held up a bandaged arm and looked at his hand. He gripped at the air contemplating the question.

“I… erg” It hurt to speak. “I am no one. The world will not notice my passing, I’m simply here to save as many lives as I can.” A worried look crossed the woman’s face.

He patted at his shoulders trying to feel for his armor.

“Don’t worry your armor is safe. I cleaned it up, tried to repair it the best I could. No small feat mind you. I’ve never seen a suit of armor so complicated, it was getting in the way of tending to your wounds.”

“I’ve hidden it for now, though… you really shouldn’t be seen wearing it around here. You could get executed for just being caught with something so rare. Most of the people around these parts don’t take too kindly to Paladins, Clerics, or Priest.

“Heh, then it seems I’m in the right place. Why…” He paused for a moment.

“Why did you risk your life to help me?” he asked

“Because, a Paladin saved me from a fate worse than death once.”

“There’s a lot of that going around these days.” The Knight joked before falling back to sleep.